Magical Memories Of Paul Simon’s Concert In The Park 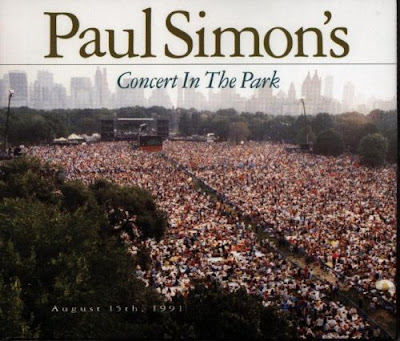 It’s one of those days that you never forget. August 15, 1991. I was twenty, having just wrapped up a pair of classes at Adelphi University. All summer long I had this date marked on my calendar. Paul Simon’s epic free concert on the Great Lawn in Central Park. And then the day finally arrived. My excitement was in overdrive.

It was warm and sunny when I awoke early that morning. Hastily I packed a bag with a few essentials, grabbed some cash, an umbrella (in the event of forecasted rain) and a pair of sunglasses, then hurried to catch a train to Manhattan and meet up with a trio of friends. 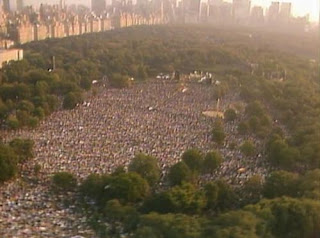 The Central Park concert: The ultimate gig for any musician. I had seen a handful of them on television in years past. There was the big Simon & Garfunkel reunion back in 1981 which drew half a million people. A show so legendary that it was that it still being rebroadcast on PBS stations a decade later. Elton John had packed the Great Lawn one September earlier for a massive freebie extravaganza. Diana Ross got her showcase in July of 1983, although her initial attempt was curtailed by a severe rainstorm. Her make-up show the next evening enjoyed good weather, but was marred by a crime spree that resulted in Central Park concerts being off-limits for the next seven years – the Philharmonic notwithstanding. 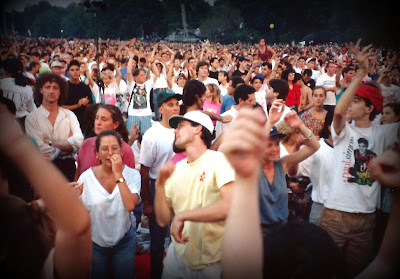 My novel, Poet Of The Wrong Generation opens with our protagonist, Johnny Elias, and his friends rushing into Central Park to grab a prime viewing location for Paul Simon’s 1991 concert in the park.  Chapter one gives readers a glimpse into the lives of our four main characters, while spotlighting what was to be the best day of their young lives. All the sights, sounds and aromas are carefully reconstructed through the perspective of Johnny Elias. I guess one could say that having experienced that monumental episode in person, it wasn’t too difficult to transfer my experiences into fiction. 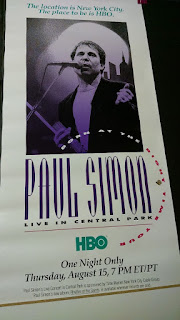 The concert that evening by Paul Simon was quite the spectacle. Long before he and his band took the stage was a full-day of unforgettable memories. First was the quest to get somewhere in the vicinity of the stage. When I arrived with my friends in the park that late morning there were already thousands of people camped out on the Great Lawn. I would soon learn that some of them had been holding down spots for two days or more. A handful had even brought sleeping bags! 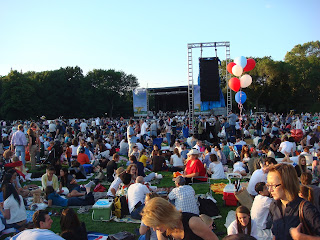 My comrades and I navigated the crowded lawn for close to an hour in search of the best possible sightline. Several seemingly unoccupied spots quickly became a point of contention when others in the vicinity claimed to be “holding it” for invisible friends who would soon return. Eventually, we settled on a patch of lawn that was approximately 30 rows (if there were actual rows) from the stage area, just right of center. We spread out a blanket and put down our bags and a cooler.

All around us were scores of music fans of varying ages filled with anticipation. Many of them were New Yorkers who had taken a day from work to attend. Some had driven in from Jersey, Long Island, Philly, DC and even as far as Montreal. There were countless twenty-somethings like us, but also plenty of folks old enough to remember seeing Simon and Garfunkel at Forest Hill Tennis Stadium back in 1970. The t-shirts worn by many that afternoon were a visual history of Paul Simon’s concert tours through the decades.

Boom boxes situated on beach blankets in all directions blared competing music, mostly the classic rock stations of that era: 92.3 K-Rock and 102.7 WNEW. Rather than annoying, the blend of music created a symphony of sounds that would provide a unique soundtrack for the balance of the afternoon. Footballs and Frisbees were being tossed in all directions. My friends and I joined in on a few games of catch, yet always with at least one of us on the blanket at all times to ensure that our prime real-estate wasn’t claimed by late-comers. 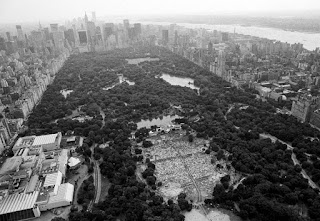 By mid-day, the summer sunshine had become rather oppressive. The high temperature that day was 91 in the shade. On the Great Lawn – with no shade in sight – the weather was downright steamy. At least the dreaded forecast of rain was thankfully incorrect. My friends and I took turns making runs through the crowd to the vending carts on 5th Avenue to purchase frozen lemonade. But as the massive crowd swelled by 3pm, we were pretty well locked in place. A huge police presence began to gather and instructed all to stay in their roped-off sections. It's a minor miracle that a few unauthorized t-shirt vendors managed to sneak through, displaying mostly professional-looking apparel that fans grabbed for $10 a piece. 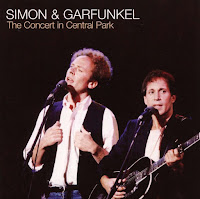 I recall snippets of many conversations that I enjoyed with random strangers that afternoon. The majority of these centered on classic rock bands, concerts of yesteryear and rumored special guests for the show that evening. If social media had been around in 1991, the word “Garfunkel” would have been hash-tagged and seriously trending. Fans on all corners of the Great Lawn were buzzing with curiosity as to whether Paul Simon’s estranged musical partner might turn up on stage. It would prove to be wishful thinking.

The other aspect of the day that clings to my memory is how friendly and communal the atmosphere was.  So long as you didn’t infringe on someone else’s “reserved” space, the surrounding masses were delightful to be with. There were guys with guitars leading joyful sing-alongs, sun-bathing women sharing tubes of sun-block, and even good-natured police officers offering directions to the nearest porta potty. Some groups engaged in elaborate wine and cheese picnics. Others kept cool by consuming whatever cold beverage they could get their hands on. 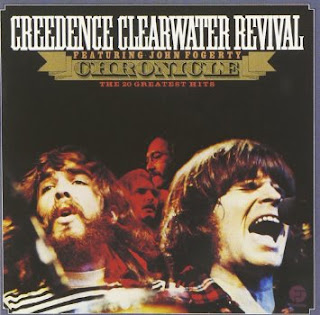 A trivial fact from that glorious afternoon was that Paul Simon had a spectacular, unofficial opening act – albeit pre-recorded. Somewhere around 2:00 the sound engineers decided to test the audio system by blaring the greatest hits album of Credence Clearwater Revival. Within mere seconds of the opening chords of Up And Around The Bend, thousands of sun worshipers were up on their feet, singing dancing and clapping along with the music. And with each CCR hit that followed, the sing-along grew louder and more passionate. It was rock & roll nirvana, only a lot more tuneful than Kurt Cobain.

Estimates on the size of the crowd that day ranged anywhere from half-a-million to 750,000. I’m not sure whose job it was to count that day, but overhead images and video sure make it look like the largest audience ever assembled at a New York City concert. It was a startling mass of humanity. Giant video projection screens and dozens of speaker-towers were assembled at the halfway point of the jam-packed lawn to enable scores of attendees to see and hear the performance. Anyone who dared to enter the park after 5pm was relegated to experiencing the show via audio/video technology.

It was somewhere around 7:30pm when the other opening act took center stage. A parade of New York politicians were introduced to the mammoth crowd, who responded with a chorus of boos. It wasn’t politically motivated – just a bunch of overheated music fans waiting to be entertained by one of their great generational heroes. Speeches and photo-ops by elected officials were sorely out of place. The harshest reception was reserved for Mayor David Dinkins. New York City’s 106th head-honcho was soundly jeered when he stepped up to the microphone. But he exited to thunderous cheers after enthusiastically introducing the star attraction. 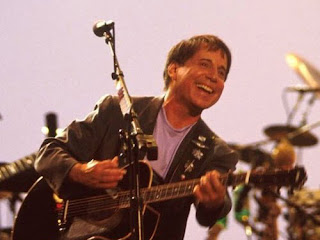 More than half a million people all rose to their collective feet. The roar of the crowd was ear-splitting. The opening song was Paul Simon’s latest radio single, The Obvious Child. It featured a row of ten Brazilian percussionists with tri-colored drums standing elevated behind the eight piece band. Quite the colorful spectacle. 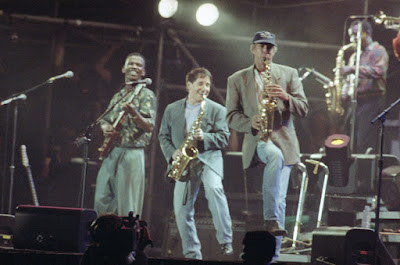 The balance of the show was a blend of 23 songs cherry-picked from Mr. Simon’s immense catalog of classics. Several were from his Graceland album, most memorably You Can Call Me Al (featuring a guest dance appearance by Chevy Chase). Early solo hits included Slip Sliding Away, Late In The Evening, and Kodachrome. And of course there was his legendary Simon & Garfunkel nuggets, Bridge Over Troubled Water, America, Cecilia and The Boxer. Though many of these timeless tunes had been released in the decade before I was born, I had been fortunately raised on them by my Mom. She and I used to harmonize with these songs in our living room when she played them on her stereo record player. They’ve fondly stayed with me ever since. 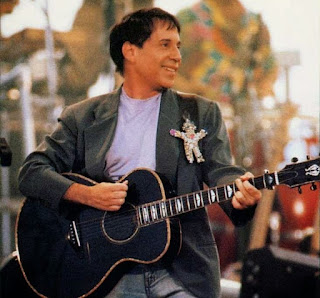 A big personal highlight that night was the performance of Me And Julio Down By The Schoolyard. This up-tempo acoustic tune had the masses up and dancing around. One could hear the song perfectly, although our view of the stage was now obscured. Many of the men in front of us began hoisting their female companions up on their shoulders. Spontaneously, I bent down and offered to lift my friend Kenny up above the crowd. I didn't think he would take me up on it. The man is approximately six foot two and weighed around 200 pounds back in the day. He looked terrified when I suggested the idea. But after a shrug and a moment to think it over, he leaped up on my back, swung his legs over my shoulders and steadied himself. Adrenaline enabled me to keep him there for the duration of the song. Given our proximity to the stage one can actually catch a quick glimpse of his dark curly hair high above the masses in some of the audience shots from the HBO broadcast. Our shining moment of concert immortality, or so we boasted for the past 26 years.

My novel’s protagonist, Johnny Elias, likened his attendance at Paul Simon’s Central Park concert as the next closest thing to being at Woodstock for those who were too young to attend. No, it did not own the cultural impact of that 1969 music festival in upstate New York. But for the more than half a million people who took part in this one day musical love-fest on the Great Lawn that perfect summer afternoon, they all share in the memory of something truly magical.


Poet Of The Wrong Generation by Lonnie Ostrow is now available in paperback and eBook format.
CLICK HERE TO ORDER YOUR COPY. 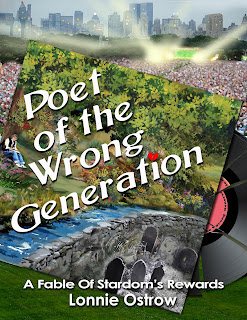